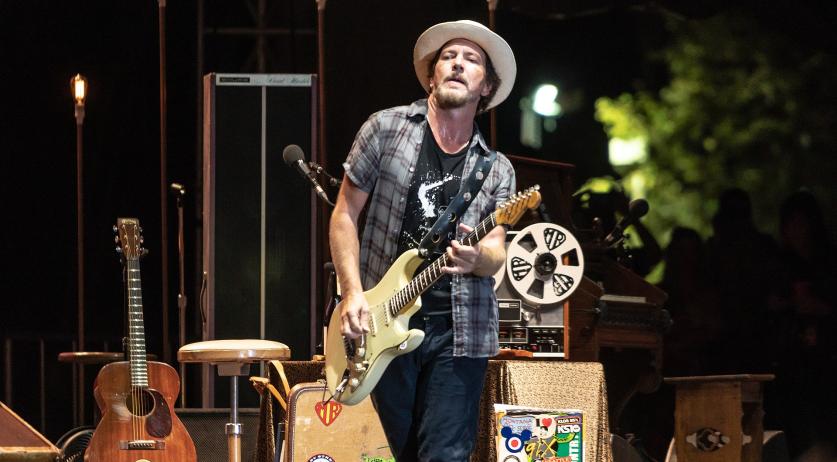 Eddie Vedder, the singer and frontman of band Pearl Jam, is looking for the woman who gave him a lift on her brother's bike to his hotel in Amsterdam in 1992. He often thinks back to that moment. "Is the woman who gave me a lift to my hotel in 1992 maybe here tonight?" Vedder asked during the first, sold out, show of his solo European tour in Afas Live Amsterdam on Sunday, AD reports.

After asking this question, Vedder looked expectantly out at the crowd, but all remained silent.

Vedder then told the story. After a concert by -  then still relatively unknown - Pearl Jam in Amsterdam's Melkweg in February 1992, Vedder found himself at the venue alone. The band and crew had already left and the then 27-year-old singer had no idea how to get to his hotel. He asked an unknown woman for help.

She promptly borrowed her brother's bicycle, Vedder said. "It was ice cold, and I got a red flannel shirt - that might have also belonged to her brother." The woman cycled Vedder to his hotel, him sitting on the back of the bicycle. "I remember her hair kept flinging against my face." She dropped him off and they parted ways.

Vedder regularly thinks about this moment in his life. "I am almost certain that I would still recognize her face." He called the anecdote an example of selfless kindness. Just like the fact that no one pretended to be her on Sunday. "That's also nice", he said.