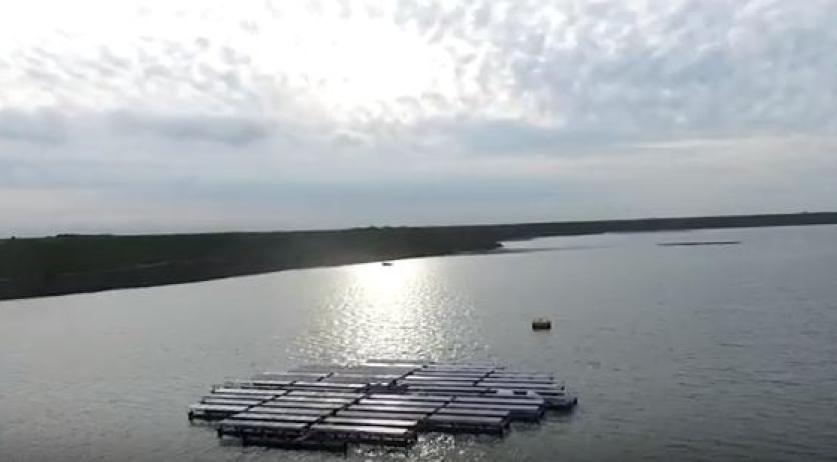 Arnoud van Druten of Floating Solar came up with the idea of islands of floating solar panels. These floating panels have two major advantages - they are out of sight, and they rotate with the sun so they can generate up to 30 percent more energy than the static, land-based ones, he said to RTL Nieuws.

Floating Solar already has solar islands being tested on the Tweede Maasvlakte. "These are sun-following panels", Van Druten explained. "You can best visualize them as a bed of sunflowers. The sunflowers also look towards the sun all day long to get that maximum sun generation, so they continue to grow." The panels are fixed on systems that can be described as large catamarans - light can pass through, and plants and animals can live underneath. The island is held in place by three buoys, and pulled around by cables.

Despite this, renewable energy regularly encounters resistance in the Netherlands. A month ago an entrepreneur announced that he is withdrawing from a wind farm project in Drenthe, due to threats made against him. There are also many complaints about offshore wind farms, with opponents fearing horizon pollution and environmental damage.

"What you see in the Netherlands is that everyone wants sustainable energy, but not in their back garden", Van Druten said to RTL. "Then you have to make a system that people do want in their backyard, because they see the possibilities." For example, you can build a dike in a circle around the solar islands, which can be used as a small nature reserve or as a recreational area, he said.

The D66 supports the idea of solar panels on the water. "You only have to invest 3.5 percent of the IJsselmeer to supply a million households with electricity. That way we can achieve the goals", D66 parliamentarian Matthijs Sienot said to the broadcaster.

But it is not as simple as that. For example, the Netherlands' electricity grid is already full with all the current solar projects and there is also no cable that can bring the electricity generated on the IJsselmeer to the country. Without additional subsidy to install that, the electricity will be too expensive to be feasible.

The D66 thinks the government can step up and solve this problem. "The government can provide stimulating subsidies, connection to the electricity grid, test projects and clear laws and regulations. Just like we did at the wind farms in the North Sea", Sienot said.