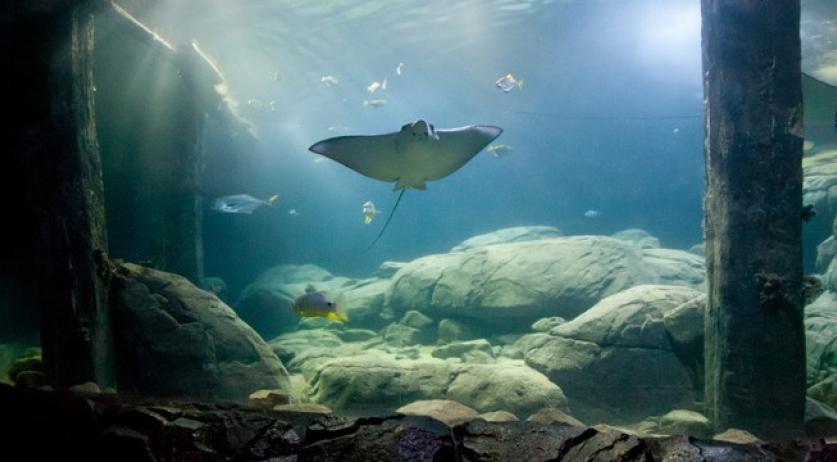 For the first time ever, researchers successfully put a fish species on contraception. Dutch biologist Max Janse and vet Henk Luten of Burgers' Zoo implanted a straw full of hormones into an extremely fertile eagle ray, after which she stopped producing offspring. Two years later the researchers published their results this week, NOS reports.

The Aetobatus ocellatus, the spotted eagle ray, is a protected species. Burgers' zoo started a breeding program for the fish in 2009. "Since then 58 offspring were born in the zoo. That is really a lot, Janse said to NOS. After researching the parents of the young rays, they found that 21 of the youngsters came from one female ray. "If all fish come from one specimen, they become genetically too similar. That can cause complications."

Janse and his colleagues spread the young rays to various European aquariums, including in Valencia, Tenerife and Denmark. "But moving the mother was not an option: it is too stressful. The animal is 1.8 meters wide and weighs 80 kilos. You need a truck to move such a ray. In the meantime she continued to reproduce." Moving the male adult rays was also not an option because of their size.

Janse and Luten therefore investigated whether they could inhibit the ray's reproduction through contraceptives. "We placed a straw in the female's left pectoral fin. That straw continuously releases a small amount of hormones. Because the hormone cycle is interrupted, the fish does not ovulate any more."

This method is not entirely new and has been applied to various mammals. "But the composition of hormones for fish is a bit different", Janse said. "So it was \exciting to see if it would work, but the ray has not been in foal for two years."