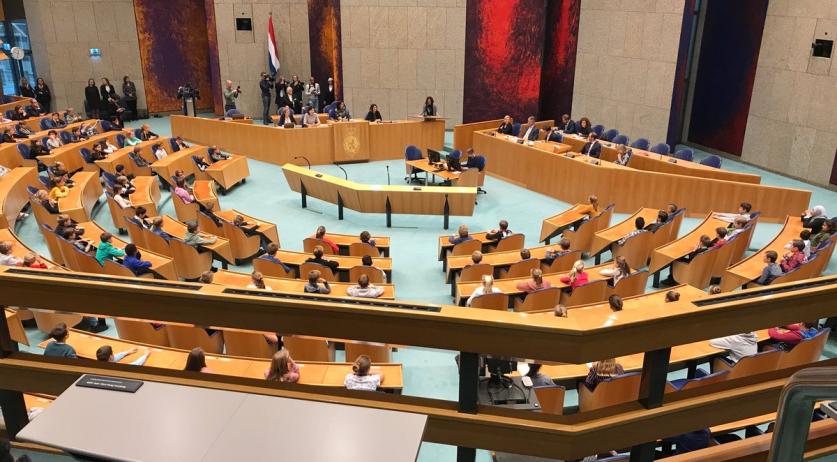 For the first time in Dutch history on Tuesday the Tweede Kamer, the lower house of Dutch parliament, held a children's question hour. A total of 150 children from primary schools across the country took the places of parliamentarians and asked the government about matters that concern them, NOS reports.

The first question, posed to Prime Minister Mark Rutte, had to do with why kids under the age of 18 can't vote. Rutte said that the government doesn't want children to vote because they are not yet adults. "That is a very good question you ask", he said to questioner Ruby Moll. "We often say that when it is a difficult question." He advised the young "parliamentarians" to become active in a youth political organization or action group. "Is there a chance that it will ever happen?" Luna asked at the interruption microphone. Rutte promised to discuss this at the next Council of Ministers, and to call her with the outcome.

From Minister Arie Slob of Primary and Secondary Education, the children wanted to know why schools don't pay enough attention to exercise and sports. Slob surprised the young MPs by saying that all primary school pupils should have gym classes for at least two hours a week. One pupil saw his chance and asked if this meant he would have to read less to move more. That won't be possible, Slob said. He hopes that schools will come up with creative solutions to make their pupils move more, without hampering their education. "Maybe you can move while you're reading?" he said.

The kids asked Minister Ingrid van Engelshoven of Education, Culture and Science why people with a lower education level like VMBO get less salary when they start working, while they often do more than people with higher education. They want less focus on "higher" and "lower" education, because "education is education". The Minister completely agreed with the young MPs and assured them that she will lead with good example by using the words "theoretic" and "practical" education during her work.

The parliamentarians asked Minister Eric Wiebes of Economic Affairs and Climate what people with gas stoves are supposed to do when gas extraction is halted. He assured them that this is not something that will happen overnight, and there is still time to arrange for alternatives. "You still have 32 years left before the gas valve closes, and then you'll be in your mid 40s and I'll be somewhere in the 80s", he said.

Kamer president Khadija Arib regularly checked whether the Ministers' answers satisfied the children. "I more or less expected that answer", one told her, according to the broadcaster. "So I want to thank you."

The Children's Question Hour was the initiative of D66 parliamentarian Rens Raemakers. He finds this a good way to involve children in politics. Arib said that this question hour will become an annual tradition in the Netherlands. It will be held each year on November 20th, the International Day of the Rights of the Child.