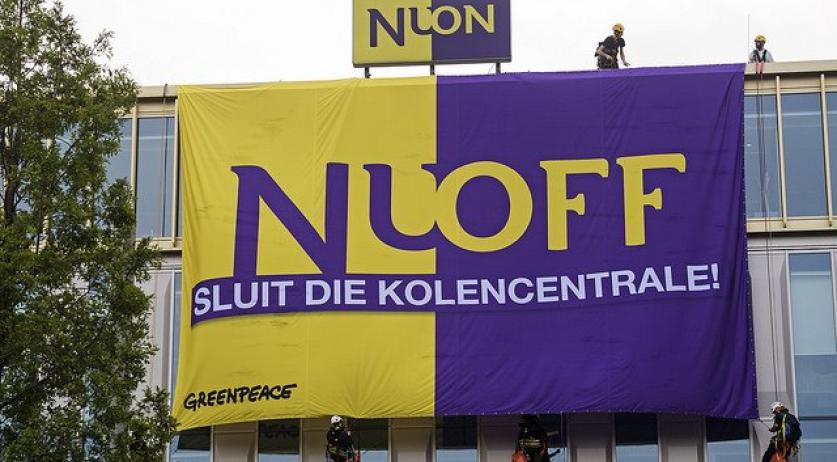 About 25 people from environmental group Greenpeace are protesting in front of the Nuon headquarters in Amsterdam on Thursday, calling on the power company to close its coal power plant on Hemweg. Five of the protesters are locked in a glass meeting room and they hung a big banner on the Nuon building's facade calling for the coal plant to be closed, NU.nl reports.

The Greenpeace activists plan to stay in front of the building until the energy company agrees to talk to them about closing the Hemweg power plant.

The Hemweg plant is the only coal power station Nuon owns. The company previously stated that it is willing to close the plant by 2020, but only if the government covers the costs. According to Nuon, doing so will cost around 55 million euros - 10 to 15 million euros to decommission the plant, and the rest for a proper social plan for employees, to retrain them and find them new work.

But Greenpeace thinks that Nuon should take that responsibility on itself, according to the newspaper. The environmental organization claims that every year the coal plant causes 90 million euros worth of health damage and emits the same amount of CO2 as 1.8 million cars.

Nuon is currently considering whether it is necessary to intervene in the protest, a spokesperson said to NU.nl. "The safety of our people is our priority, in previous actions against Hemweg we unfortunately saw that our people were threatened and even attacked. We can not allow that." The spokesperson added that the company is surprised by the action, given Nuon's willingness to close the Hemweg plant.

According to Greenpeace, they are not responsible for the threats and attacks Nuon mentioned and their actions are "peaceful and non-violent".