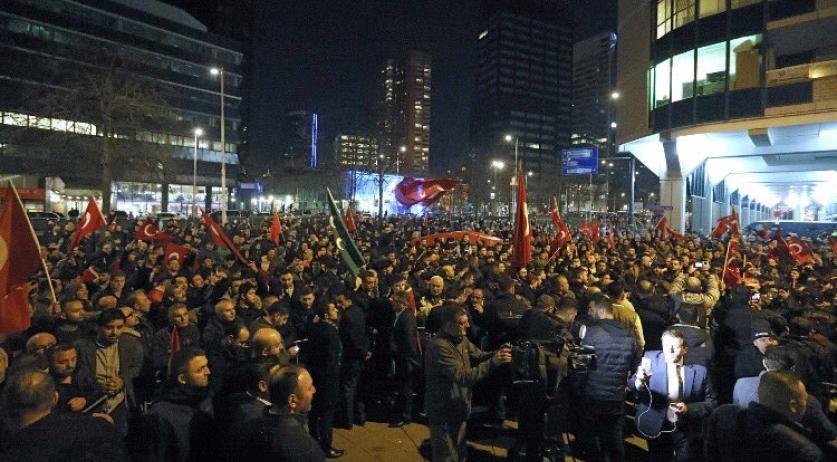 There were indications that the Turkish Minister Fatma Betül Sayan Kaya's security guards were carrying weapons during disturbances at the Turkish consulate in Rotterdam last month, the Dutch government wrote to parliament on Monday. The police therefore considered the guards "armed and dangerous". No weapons were found after they were arrested, AD reports.

Members of parliament posed questions to the government about riots at the Turkish consulate in Rotterdam around a canceled campaign speech for the Turkish referendum. The Dutch government made it clear that Turkish ministers were not welcome to campaign for the referendum in the Netherlands on March 11th. They denied landing rights of for Foreign Minister Melvlüt Cavusoglu's plane. And when Family Minister Kaya showed up at the consulate by car, she was eventually escorted to Germany. Riots broke out and several arrests were made. The relationship between Turkey and the Netherlands is still tense.

"The guards of the minister were repeatedly uncooperative during talks between the police and her entourage", Prime Minister Mark Rutte, Minister Bert Koenders of Foreign Affairs and Minister Lodewijk Asscher of Social Affairs wrote to parliament on Monday.

Due to the threatening situation at the consulate on the night of March 11th, the police deployed several arrest units. A total of 14 people were arrested and taken to a Rotterdam police station. At the station the police discovered that the temporary charge d'affaires and the Turkish Consul General in Deventer were among the detainees. They were immediately released, the Ministers wrote.

According to the Dutch government, there were "deliberate attempts to mislead" in an effort to ensure that Minister Kaya reached Rotterdam unhindered. The Turkish authorities refused to provide information about Kaya's travel plans, despite repeated requests from the Dutch government.

The Ministers also point out that neither Kaya or Cavusoglu had diplomatic immunity. That only applies to heads of state, heads of government, Foreign Affairs Ministers, diplomatic and consulate personnel and foreign officials on an official mission, and then only if they have an invitation from the Netherlands. Kaya, as Family Minister, is not covered by diplomatic immunity at all. And while Cavusoglu is a Foreign Affairs Minister, he had no invitation.