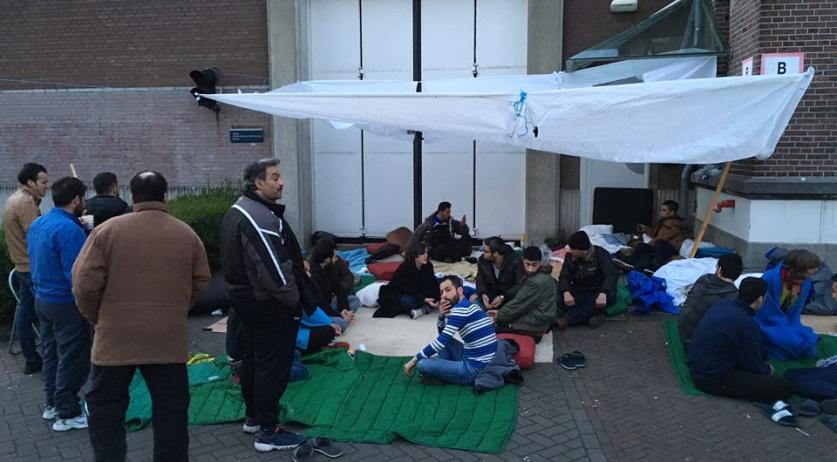 Asylum seekers living in an asylum center on Havenstraat in Amsterdam have been on a hunger strike for nearly a week. They've also been sleeping outside, in protest against the slowness of the asylum procedure and conditions in the camp.

"There are major problems with the emergency to Havenstraat", Ramon Schleijpen wrote on Gastvrij Oost, the Facebook page created by a group of Amsterdam inhabitants to help refugees, on Tuesday last week - the day the hunger strike started. Since then several asylum seekers were taken to the hospital to be treated for malnutrition and exhaustion, according to Het Parool.

The asylum seekers are protesting against the delay in their asylum procedure. They were told they'd be living in the center for a few days while the procedure got started, yet many of them have been staying there since October or even September. According to Schleijpen, so far the only contact with the Immigration and Naturalization Service consisted of taking fingerprints.

There are also complaints about "inhumane" living conditions in the shelter. Since the COA took over the shelter, local residents are limited in what help they can offer, Schleijpen writes. According to her, residents are no longer able to cook for themselves - food is centrally controlled, but its distribution lacks in both quantity and quality.

Requests to the COA to improve the conditions and accelerate the procedure only resulted in more security measures, Shclijpen writes - there is now more access control, no items may be taken from inside to outside and there is a ban on taking photos.

The asylum seekers' plea and hunger strike reached the attention of the media as well as the city politicians. The issue is scheduled to be discussed at the city council meeting this week, Schlijpen announced on Monday.