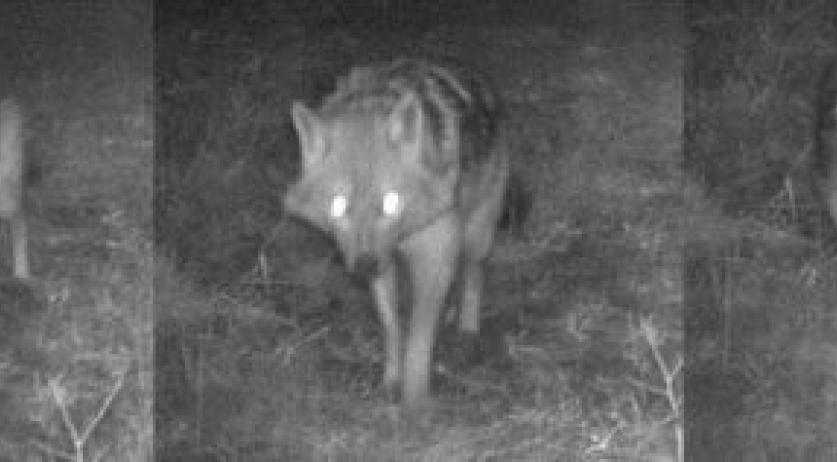 A golden jackal was seen in Veluwe on February 19th, the first such animal ever to be spotted in the Netherlands. The golden jackal was "accidentally" recorded by a camera trap during a study into ungulates by Alterra and the Wageningen University, the university announced. The camera footage was shown to several famous jackal experts, who confirmed that this is in fact a golden jackal. For privacy reasons, the site manager asked that the exact location not be revealed. The golden jackal is a medium-sized canine with a shoulder height of about 50 centimeters. The coat varies in color, usually consisting of a mixture of black, brown and light hair on the back. It has relatively long legs, narrow feet and very large ears. Its tail is relatively short, about 25 cm, with a black tip and always hangs down. This jackal is omnivorous, eating everything from rabbits to fruit and waste. This means it can live in very diverse areas, such as in steppes, forests, swamps and even areas inhabited by humans. According to the university, this species is on the rise within Europe. It was initially found only in the Balkans and Greece and Turkey, but golden jackals can now also be found more to the west and north. Countries such as Italy, Austria, Switzerland, Czech Republic, Poland and Germany all recorded the species in a growing number of locations. "We know nothing about the origin of the observed animal", Alterra researcher Edgar van der Grift said on the University's website. "The animal may have 'walked into' our country on its own merits, but it could also be that it is an escaped or illegally abandoned animal. At present we are trying to obtain DNA samples from the animal, such as feces or hair. This may provide more insight into the origin of this animal."