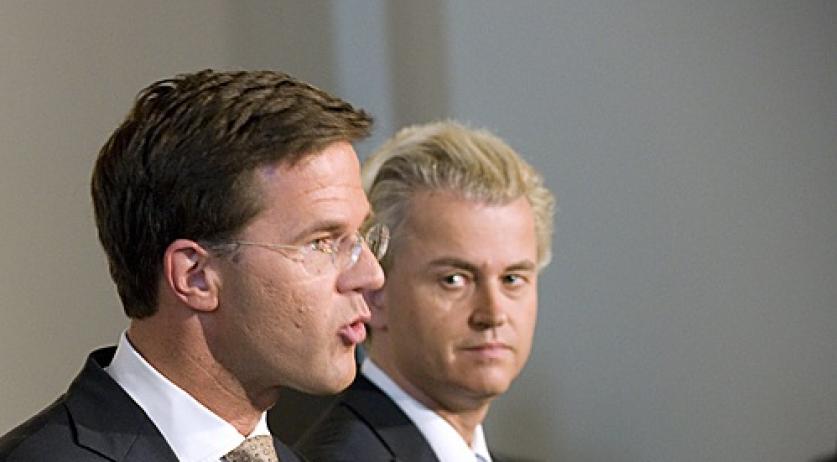 After antagonizing most of the faction leaders during the general budget debate on Wednesday, PVV leader Geert Wilders has now turned his attentions to Prime Minister Mark Rutte. Wilders and Rutte spoke some harsh words in their clash over the refugee crisis, with Wilders telling Rutte that "he's only Prime Minister on paper", and Rutte accusing Wilders of "illusion politics". Wilders started his interruption by talking about the rising number of asylum seekers and telling Rutte that his cabinet only has 20 percent support in the polls, according to the Volkskrant's live blog on the debate. He said that Rutte's cabinet can not make important decisions about "the asylum tsunami of Islamic people that is overflowing our country" with only 20 percent support. "Move the elections and let the voters decide", Wilders said. Rutte retorted that if he did what Wilders wants, it would leave politics completely powerless for the next four months, right in a time when important decisions need to be made. "I will not do that. I stand here to solve problems and not to throw in the towel when things get difficult", the Prime Minister said. He added that Wilders' daily talks of "Islamic tsunami" and "testosterone bombs" are "terrible terms" that contribute nothing to a solution. Wilders continued that he will call on the people to rise up against a Prime Minister that is "actually only a Prime Minister on paper". Rutte responded by accusing Wilders of illusion politics. "One measure can not solve all the problems and Wilders knows that better than anyone." The PVV leader then accused his opponents in the Tweede Kamer, lower house of parliament, and the cabinet of living in a dream world. Rutte replied: "I've heard that your favorite attraction in Efteling is Droomvlucht (dream flight in English, ed). You live in a dream world." Rutte believes that the Dutch people will act wisely when faced with a difficult problem like the refugee crisis. He thinks that there is very limited support in society for the extreme approach Wilders is advocating. ChristenUnie leader Arie Slob is concerned that there will not be enough money to deal with asylum seekers. A concern shared by GroenLinks leader Jesse Klaver. "I can reassure mister Slob: the estimates are going up", the Prime Minister said. SP leader Emile Roemer wanted to know what was achieved with the money-for-the-region at the EU summit on Monday. Rutte replied that no unanimous decision was reached over the short term - the redistribution of asylum seekers in Europe. But they did reach a decision over the long term. "To improve shelter in the region", Rutte said. According to him, the European leaders will discuss it further on Tuesday. "Earlier than planned, but it's all going too slowly."