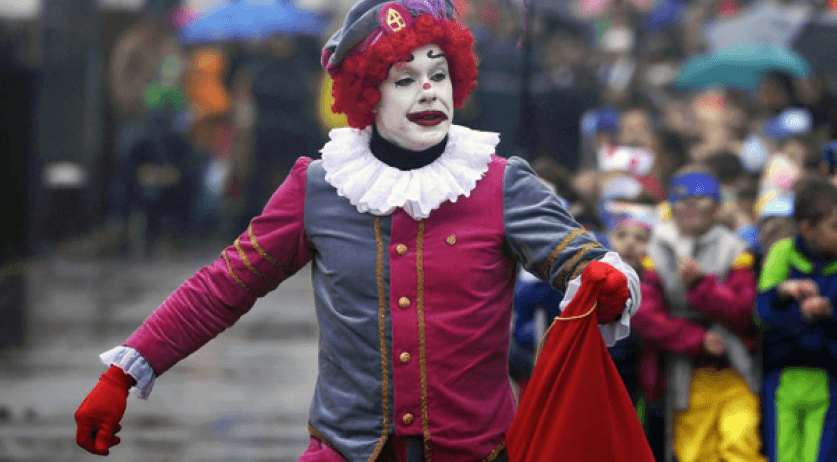 The voting on Van Dale Word of the Year 2014 ends today at 12:00 p.m. The results will be announced tomorrow. Every year Van Dale chooses 10 new words from current news events. The public can vote for their favorite word, which will then receive the title Van Dale Word of the Year. Last year's winner was the word "selfie". This year there are also five categories with words nominated by the Dutch public. The categories are youth language, lifestyle, sports/entertainment, economy and politics. These words are competing for the best word in the category. Van Dale's nominations for Word of the Year 2014 are: Clownspiet - a cross between Zwarte Piet and a clown. Crimiclown - a terrifying clown who goes around scaring people. Dagobertducktaks - an additional tax for rich people. This word is named after Dagobert Duck, Donald Duck's super rich uncle. He is known as Scrooge McDuck in English. Fotobom - appearing in the background of someone else's photo, either deliberately or by accident. Jihadgezin - the family of someone who has gone to Syria to join the jihad and fight with the radical Muslims. Kalifaatganger - someone who has gone to join the Muslim caliphate. Moestuinsocialisme - this word literally means vegetable garden socialism. It comes from PvdA minister Jetta Klijnsma saying that gardening is good for the elderly with low incomes. Stemfie - taking a picture of yourself (selfie) while voting. Straatintimidatie - street intimidation. Wegkijkstaat - this word literally means look away state and refers to a society in which everyone ignores the less fortunate.