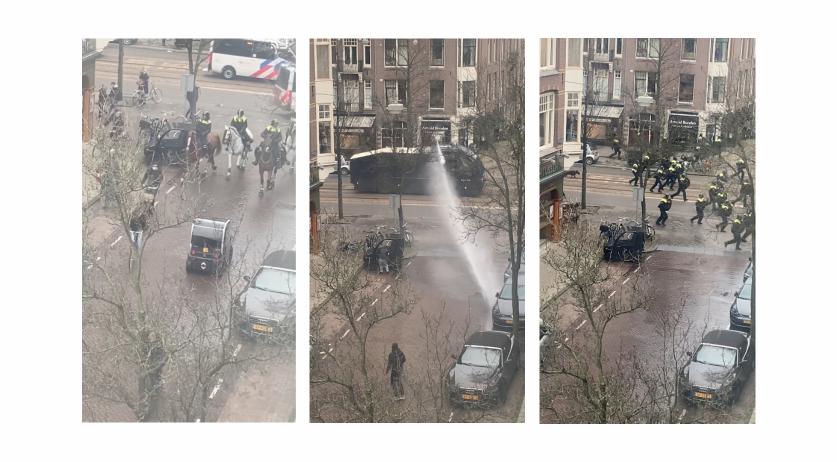 Various parliamentarians responded on Twitter to curfew-related unrest in the Netherlands over the weekend, denouncing the illegal protests and riots. The Security Council, which consists of the mayors that head the country's 25 security regions, will discuss the curfew and unrest in their weekly meeting on Monday.

Mayor John Jorritsma of Eindhoven, where the riot police resorted to tear gas and water cannons to disperse rioters after an illegal protest on Sunday, called it "bizarre" what happened in his city's center. He is worried about the coming days, he said to NOS. "That's how we're heading for civil war,' he said.

For the first time, the Security Council meeting will happen in the afternoon instead of the evening, so that attendees can be home by curfew. Minister Ferdinand Grapperhaus of Justice and Security will also attend. He called the riots "simply criminal behavior", speaking to RTL Nieuws.

Far-right party FvD responded to the riots, but initially did not explicitly condemn the violence. "This is the second night that Rutte had the Netherlands locked up. More and more people are turning against the curfew. Only together can we regain our freedom," the party tweeted. When NOS published the tweet, the FvD responded with this tweet: "Another example of fake news from the NOS. FvD Naturally condemns the violence used in the protests." A spokesperson added to the broadcaster: "We thought that condemnation spoke for itself."

The illegal protests in Eindhoven and Amsterdam, arson at the Covid-19 test center in Urk, and riots elsewhere in the country had left-wing GroenLinks leader Jesse Klaver and right-wing PVV leader Geert Wilders lashing out at each other.

"Unacceptable what is currently happening in Eindhoven, in Amsterdam and especially what happened yesterday in Urk," Klaver tweeted on Sunday. "Do not forget that PVV Urk incited this violence. Unacceptable, undemocratic, and downright dangerous, intervene Geert Wilders!"

With that Klaver referred to a statement by the PVV faction in Urk last week. The faction is vehemently against the curfew and said it "will do everything in its power to ensure it is not enforced in Urk". The PVV Urk leader did call on locals to not break the law on Sunday, according to NOS.

Wilders tweeted that people must "stop it" with the violence in Eindhoven, Urk and Amsterdam. "And that of course also applies to Jesse Klaver's fur-collar friends from the Schilderswijk: get out!"

D66 parliamentarian Sjoerd Sjoerdsma tweeted that Wilders must "stop with the incitement".

PvdA leader Lilianne Ploumen tweeted about the unrest in Urk. "Ignoring curfews, setting fire to test center, harassing and assaulting a security guard, making the work of the press impossible. The perpetrators must be caught and punished."