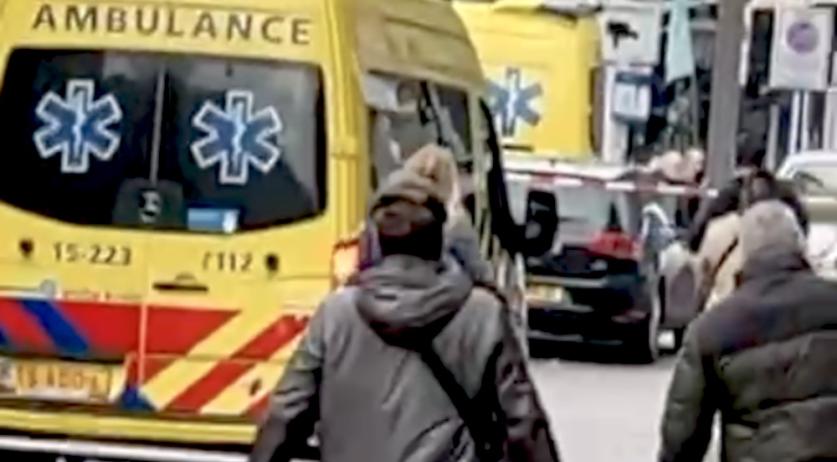 Ambulances arrive at an Albert Heijn in The Hague where two people were stabbed and the store was set on fire. 2 Dec. 2020 Timo Salminen Supplied to NL Times
Crime
Weird
The Hague
Zuid-Holland
Albert Heijn
stabbing
arson
politie
Wednesday, December 2, 2020 - 16:06
Share this:

One held in Hague grocery store stabbing, arson that injured 6

Police in The Hague said a 43-year-old man suspected in a stabbing and arson at an Albert Heijn on Grote Marktstraat was arrested just southeast of the city in Pijnacker. The violent outburst left six people injured, five of whom were taken to an area hospital.

Two of the victims hospitalized were employees of the supermarket injured in the stabbing. A third employee who was lightly wounded was also treated at the scene.

Witnesses said that the person who carried out the attack just after 12 p.m. on Wednesday became angry in the store, and dumped a bottle of alcohol on the floor. He then allegedly ignited the liquid before running away from the scene.

Three police officers who responded to the assault had difficulty breathing and were treated by paramedics for smoke inhalation. They were then taken by ambulance to a hospital for observation.

"Shortly after the stabbing incident, a special arrest unit with police dogs entered a home because the 43-year-old suspect may have been there," police said in a statement. "However, he was not found here. Not much later, officers were able to arrest the man in Pijnacker, in the vicinity of the train station."

The motive for the stabbing and the apparent arson was "unclear" and was "being investigated." Witnesses were asked to contact the police with any information which could prove useful in the investigation. They also said that anyone with photos or videos from the scene should share the images with them.

A forensic investigation was still being conducted at the Albert Heijn location nearly four hours later. Evidence was also being collected at the home which was subject to the tactical raid.

Huge police operation at Grote Markt in the #TheHague. You may want to avoid the area. pic.twitter.com/daTShQREtJ