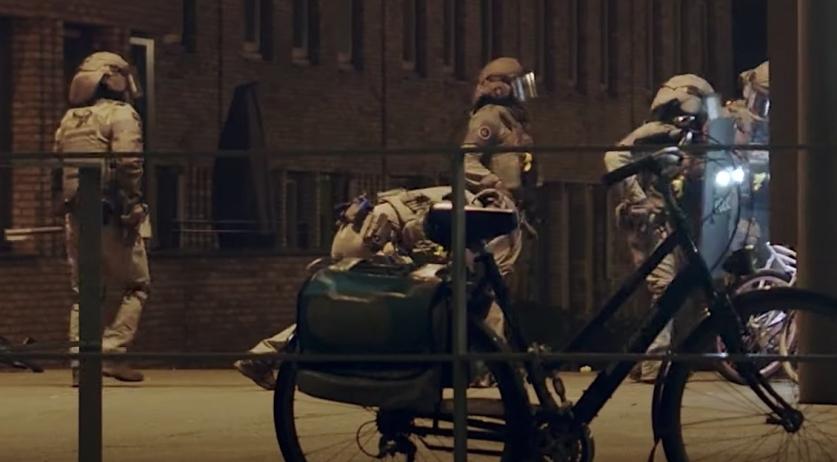 Police take down a door and make entry to a building tied to an international drug investigation. Sept. 16, 2020 Politie YouTube
Crime
Wednesday, September 16, 2020 - 15:40
Share this:

An international investigation into a drug trafficking and money laundering led to 17 arrests on Wednesday including ten in the Netherlands, police said in a statement. Piet S., known in the criminal underworld as "De Dikke" and with reported ties to the illegal drugs trade and street level assassinations, was believed to be one of those taken into custody, the Telegraaf said.

Nearly a thousand police officers carried out dozens of raids simultaneously at locations in Belgium, Hungary, the Netherlands, Slovakia and Spain. The investigation was sparked by information uncovered by Dutch authorities when they gained access into the EncroChat system, an organization which provides encrypted phones. Police previously said the evidence gathered from this was expected to be used in 300 criminal cases.

The remaining seven arrests happened in Belgium and Spain, with Dutch authorities requesting they be extradited to the Netherlands. All 17 suspects were between the ages of 25 and 68, police said. Several of them were being held on weapons possession charges.

Based in The Hague, Piet S. would be the second high-level drug trafficker to be caught as a direct result of the EncroChat breach. Roger P. from Rotterdam was found via information obtained through EncroChat. Around the same time Cetin G. was arrested in a joint case with Brazilian authorities, though it was not announced in connection with EncroChat. He was a fugitive who was convicted in 2016 in a major cocaine trafficking case for which he was sentenced to 14 years in prison.

In early July, police said the EncroChat hack led to the arrests of over 100 suspects in the Netherlands alone. Authorities monitored the system for at least two months up through at least mid June, when EncroChat cautioned its users to get rid of their phones because a government agency penetrated their security.

The discovery of an illegal underground jail, including a torture chamber, was among the high-profile cases linked to the encrypted phone hack. Six people were arrested in connection with that case.

The EncroChat arrests involved the discovery of over eight thousand kilograms of cocaine, 1,200 kilograms of crystal meth, 20 million euros in cash, and dozens of weapons, expensive watches and cars.

Wednesday's investigation was part of a Dutch-Spanish collaboration organized through Eurojust, which fosters cross-border cooperation in criminal cases.