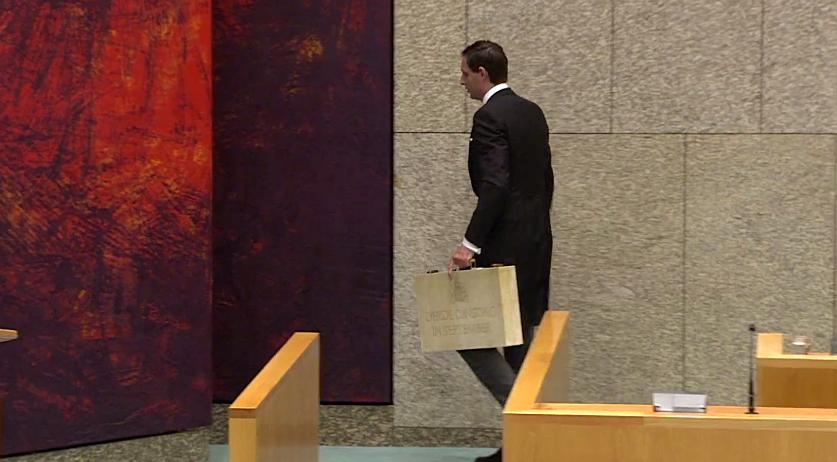 Finance Minister Wopke Hoekstra presented the national budget for 2021 to the Tweede Kamer, the lower house of Dutch parliament, on Tuesday afternoon. Like the King in his annual speech, Hoekstra stressed that through this difficult time, the Rutte III government will invest in a stronger and cleaner future.

In February, the economy was still growing - for the 23rd consecutive quarter. That now feels like a century ago, Hoekstra said. "Now we are dealing with the strongest economic contraction since the Second World War." The Dutch economy is expected to grow again next year, but the worst is far from over.

"To a large extent, the blow has yet to come. Unemployment will rise next year," Hoekstra said to parliament. "And yet there is reason to look to the future with confidence. We are going through a deep valley, but our economic foundations are strong. As government, we must be the stable factor."

The climate agreement and pension agreement will be implemented as planned. Investments in education and housing construction, and in reducing nitrogen emissions will happen as planned, Hoekstra said.

The Finance Minister stressed that the coronavirus crisis is causing a great deal of uncertainty. "This is not a normal budget. Chances are that all the numbers in the briefcase will change. It continues to be steering in the fog. But we do what is necessary," Hoekstra said.

The Tweede Kamer will debate the content of the budget beginning on Wednesday.

The government is pushing money into affordable housing. 450 million euros will be available next year to stimulate building more homes. 20 million euros will also be used to transform storefronts and office spaces into homes. The cabinet also said it will reduce the property transfer tax for some first-time home buyers. The Ministry of Home Affairs and Kingdom Relations said that this applies to buyers up to the age of 35 for the acquisition of one property.  The national mortgage guarantee will be expanded.

A rent reduction will be made available for 260 thousand social housing tenants whose rent is too high for their income. On average, this will be a 40 euro per month reduction. Landlords and tenants will be forced to work with municipalities from January to find solutions when renters fall behind on their monthly bills.

And one billion euros is being set aside over the next 10 years to help the construction industry cope with the plan to reduce nitrogen emissions.

The Ministry of Infrastructure and Water Management said that a total 1.9 billion euros will be invested at an accelerated pace into the maintenance and replacement of roads, train tracks, waterways, and dikes. "With this we not only invest in better accessibility, safety and quality of life, but we also offer our construction sector an outlook of work in these difficult economic times," the Ministry said. “People are currently traveling less. However, as the population grows and many homes need to be added, the pressure on roads, rail and public transport will increase.”

This amount includes 500 million euros to carry out national infrastructure maintenance aster. Another 265 million euros to upgrade bridges, tunnels and water locks built in the decades after World War II. An additional 100 million euros to improve road safety and cycle paths next year, on top of the annual 50 million euros already allocated for this. 40 million for an accelerated circular economy plan with a goal of using 50% fewer raw materials by 2030, and fully circular by 2050. 740 million to make sure public transportation runs fully for people in vital sectors. The money is for the first half of the year.

200 million euros of that amount is extra for the approach to droughts and climate adaption. "There are longer periods of drought and also more often heavy showers with flooding as result. Protecting against water was our motto, now we must also champion retaining water," Minister Cora van Nieuwenhuizen said. The Ministry will work with the water boards, municipalities and provinces on solving the main problems with water shortages and flooding, also to help better guarantee drinking water in the future.

141 million euros will next year go towards creating a Multidisciplinary Intervention Team of hundreds of intelligence experts, law enforcement officers, digital investigators, and forensic accountants to tackle “the poison of criminal money, threats, intimidation and assassination.” The MIT team will be funded with 150 million euros structurally after 2021. That money will also be used to enhance witness protection, and to provide security where needed to officers of the court, judges, police and journalists.

Inflation of 1.5 percent is expected to outpace the 1.2 percent predicted wage increases, so a 1.4 billion euros  “supplementary support package” will be created to help “people and companies adapt to the the new situation” caused by the developing economic crisis.

The employed person’s tax credit will increase by up to 324 euros per person. The general tax credit will increase by 82 euros. The first progressive income tax bracket will drop by 0.25 percentage points to 37.10 percent. Taxes will be lowered for pensioners and benefit recipients. Families with more than two children will receive an extra 617 euros per child per year, starting with their third child.

The Ministry is investing in more access for newcomers to work in the Netherlands and learn Dutch starting in July. A more modern pension system will be introduced by 2026 with more personalization. Investments will also be made into initiatives to future-proof the labor market, as well as into better access to the labor market for people with an occupational disability.

Extra measures are being taken to make sure the tax system comes out of the coronavirus crisis better, more honest, and more sustainable. To help people who lost their jobs in the corona crisis retrain for a different job, employers will no longer have to pay wage tax and national insurance contributions for training costs incurred after termination of emplacement.

The previously announced cut to the high corporate tax rate will be scrapped, keeping this rate at 25 percent. The lowering of the low corporate tax rate will continue as planned, lowering this rate from 16.5 percent to 15 percent. Some SMEs will also pay this lower rate in the coming years. From next year, the low rate will apply for profits up to 245 thousand euros per year. In 2022, this will be raised to 395 thousand euros.

To encourage companies to make investments, a new tax discount will be introduced next year. The job-related investment discount means that companies who make an investment, for example by purchasing a new machine, will get a discount that they can deduct from the payroll tax.

The government is pushing 20 billion euros into the National Grow Fund, which is intended to safeguard prosperity and earning capacity for future generations. This money must be used to fund big and small companies occupied with knowledge development, physical infrastructure, research, development and innovation.

300 million euros will be set aside for a fund to keep larger and large companies healthy. And 225 million euros will go to co-financing an EU program focused on regional development, innovation, sustainability, and digitization.

The implementation of the Climate Agreement will continue as planned.

The cabinet is also investing in making working in healthcare more attractive. The existing action program focused on reducing workload, reducing administrative burdens, more autonomy, more participation, and a better perspective on development and promotion, will be expanded The cabinet is pushing 20 million euros extra into this program next year, and that will increase to an annual 130 million euros from 2023.