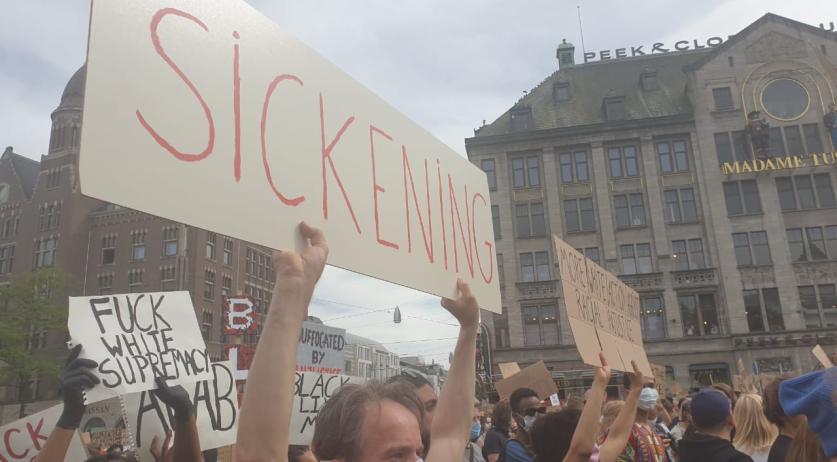 The Amsterdam authorities had bad information about how many people would attend an anti-racism protest in the city on Monday, resulting in Dam Square becoming overcrowded and making social distancing impossible, Mayor Femke Halsema said in a letter to the city council. "We deeply regret this," she said. She will make sure that their information position improves so that crowds can be handled better in the future. But she does not intend to step down over this.

In her letter, Halsema said that images of the overcrowded Dam square were indeed "painful" to see. "Certainly for all the people who have adhered to coronavirus measures in recent weeks and who have worked hard in this crisis, in healthcare and in enforcement," Halsema said. "The crowds on the Dam may have created health risks."

Halsema said that the police informed her around 6:00 p.m. that the number of protesters had increased to about 5 thousand, while they had expected a few hundred. "This made compliance with the 1.5 meters apart virtually impossible because there was simply not enough space left," she said. That left the Amsterdam triangle of mayor, police and prosecutor in a difficult position. "Acting could lead to escalation, violence, panic and people getting crushed. At the same time, failure to act represented a risk for the spread of the coronavirus."

The triangle's information was not good and this will improve in the future, she said. "The triangle did not have realistic numbers. The square filled unexpectedly quickly with protesters, who consciously took a health risk. For themselves and for others. We deeply regret this." If she had known how many people would attend the protest, she could have taken measures like moving to demonstration to a more suitable location, or spreading it out through the city.

Opposition parties in Amsterdam are considering filing a motion of no confidence against Halsema over this situation. When RTL Nieuws asked her whether she is considering stepping down, Halsema laughed. "I think the opposition should maybe wait for all the facts. Because I find it surprising that you are already making decisions before someone had the chance to talk," she said. She does not intend to step down, she said.

Minister Ferdinand Grapperhaus of Justice and Security, who also called the images of the crowded Dam Square painful to see, said he understands Halsema's decision not to intervene. "I do not want the police and protesters to be pitted against each other," he said during question hour in the Tweede Kamer, the lower house of Dutch parliament.

In a statement released Tuesday, anti-racism organization KOZP said that, like Halsema, they too were surprised by the thousands of people who showed up at Dam Square. “In our view, she has done the right thing by prioritizing the fundamental right to demonstrate over intervention by force,” the group said. “If police had intervened violently during this peaceful demonstration against racist police brutality, the situation would most likely have escalated and endangered many more people.”

At the same time, the group believes that their protest has been selectively targeted by some showing anger over the Dam Square event, but not at crowded parks, beeches, and hardware stores. “In the reactions we see political parties and politicians, such as Thierry Baudet, Geert Wilders and Klaas Dijkhoff speaking out against anti-racism demonstrations. We do not hear from these same politicians when it comes to anti-black racism in the Netherlands.”

Mayor Ahmed Aboutaleb of Rotterdam, where a similar protest is planned for Wednesday, told Rijnmond that he will not judge the situation in Amsterdam on Monday. "I do not know the considerations, so I find it too easy to jump to conclusions," he said. He did speak to Halsema on Tuesday. "That is a good agreement between us: if there are things going on in our functioning, that we call each other to listen to each other and be of support. That is how I think it should be. Rotterdam and Amsterdam should support each other in these kind of of circumstances, if it is really necessary."

Based on the much higher than expected number of protesters in Amsterdam, Aboutaleb decided to move the Rotterdam protest to the Erasmus Bridge. According to him, the Erasmus Bridge area can accommodate up to a few thousand people while maintaining social distancing.