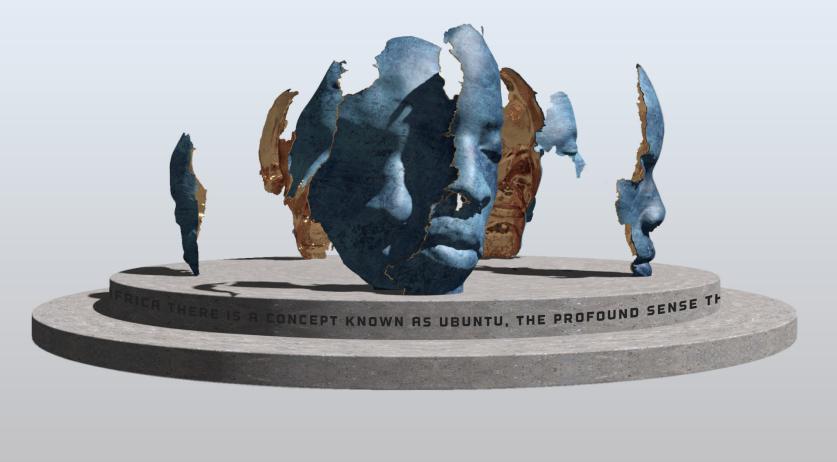 “I felt excited and proud of the work I put into my proposal,” Mohau Modisakeng said upon hearing the news that his design beat out 14 others to create the Nelson Mandela monument in Amsterdam Zuidoost.

Two weeks ago, Modisakeng, a 33-year-old artist from South Africa, was announced as the winner of the Amsterdam Nelson Mandela Memorial design competition. The Center for Visual Arts (CBK) supervised the competition on behalf of the city's southeastern borough, and selected the eventual winner from three finalists.

The visual artist is known for his photography, film, sculptures, and performance art pieces often underscoring the racial divide and violence of post-apartheid South Africa and the continent at large. But in his ten years of showing as a professional artist, he has never done any artwork related to Mandela.

“I’m proud that someday I will be able to show my newborn daughter her father's contribution to the story of the father of our nation as South Africans,” he said to NL Times via email.

The monument will consist of a group of five to six bronze faces representing the Bijlmer, where the sculpture will be erected in the Nelson Mandela Park next year, hopefully in time for what would have been Mandela’s 102nd birthday, July 18, 2020.

With the myriad of Mandela statues around the world, CBK didn’t want Zuidoost's monument to be just another replica of the former president. Noraly Beyer, chairman of the CBK selection committee, said that they were adamant that the chosen designer be capable of capturing the essence of Mandela without being literal.

They were looking for a design that portrays the content of Mandela's legacy and still projects to the world his consistent message of peace, struggle, and freedom.

“It’s a very good concept,” Beyer said about Modisakeng’s idea to use the likeness of people from the Bijlmer area to create the faces of the monument. “This one is close to the community because in Southeast they have many types of people there.”

Modisakeng said the sculpture pays homage to the ordinary people whose residence and participation in one accord serves as the foundation of their community. Their living and working together is a true representation of Mandela’s legacy, as Mandela himself always made it a point to highlight that his fight against apartheid was not won by him alone.

“This work pays homage to the efforts of the collective as opposed to the individual, hence the focus on community in this proposed work. Instead of focusing the representation on the image of Mandela the work shifts the focus and celebrates the diversity of ordinary people belonging to a community such as Bijlmer.”

Modisakeng’s strongest inspiration for this piece comes from the African philosophy of ubuntu: “the profound sense that we are human only through the humanity of others.” There is a bond between humanity and one cannot achieve greatness without others, a concept Modisakeng utilized when deciding to use Bijlmer as a reflection of Mandela.

“This is just what Mandela would have wanted because he knew people of everyday life was just like him,” said Pauline Burmann, contemporary African Art History expert. “He didn’t want to shine. He wanted the everyday people to shine.”

Burmann was on the committee that shortlisted the first 15 artists and was impressed with Modisakeng's work which she said has the ability to allow viewers to get the message in his work even if one cannot see it directly.

The artist will be in Amsterdam in September to begin scouting faces from the neighborhood to start creating the sculpture for the monument. He said he hopes that by including these people in the monument, “the fast-changing nature of a community like Bijlmer” will not dissipate the memory of such a diverse area. The faces of some of the members, "the anonymous heroes of the community will forever be represented in the Biljmer", keeping the memory of the diverse community alive for a long time to come, he noted.

“I think my role as an artist is to excavate the ruins of that forgotten past, gather the charred and broken bits of the memory of my people, and reconstruct a narrative of Africa and Africans that transcends the distortions and limitations of colonial thinking.”