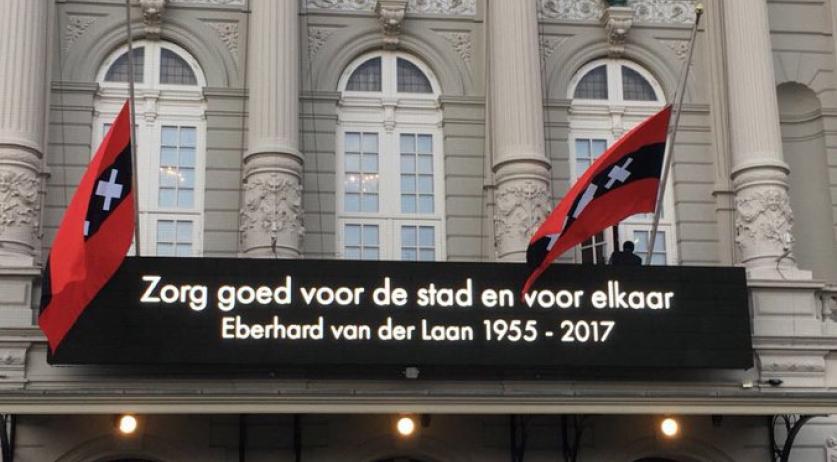 Thousands line up to say goodbye to Amsterdam mayor

The line of people waiting outside the Concertgebouw in Amsterdam to say goodbye to Mayor Eberhard van der Laan, is getting longer and longer. Thousands of people came to pay tribute to the Amsterdam mayor, who died after a months long battle with lung cancer last week.

"I was in line for an hour and a half, but it was six hours I would've done it too", Louis Dona from Amsterdam-Noord said to newspaper AD. "The man deserved it."

"I am very sad", Ben van Heyningen said to the newspaper. "Van der Laan meant a lot to me. I worked as a cleaner for 34 years and was unfairly fired. I once went to the mayor, he made one call and then I could get back to work again. His death is a very big loss to the city."

Amsterdam veteran Ron Jacobs, of the meeting center for veterans, also told AD that Van der Laan meant a lot to him. "He made the meeting center happen, so that veterans can look each other up and help each other. This man deserves this and more. We'll never have such a good mayor again."

Actor Jeroen Krabbe also came to say goodbye. "I'm invited for tomorrow, the funeral, but I have to go abroad. I think it's so terrible that he's gone and wanted to come by one last time", he said to the newspaper. He praised the mayor for his role in Amsterdam's Zwarte Piet discussion. "We were in his room, both opponents and advocates and he did so fantastically. It was really hard and at one point he got up and said: 'I'll be back in half an hour and then it will be settled'. And it was too."

Inside the Concertgebouw, people are given a cup of coffee and they can leave their condolences. Music plays in the background and the walls are filled with pictures of the Amsterdam mayor and 'his' Amsterdammers. A sea of flowers surround the oak wooden coffin, made from trees from the Vondelpark. There are dozens of bouquets, including from King Willem-Alexander and Queen Maxima. Many Amsterdammers also leave flowers, cards or candles behind.