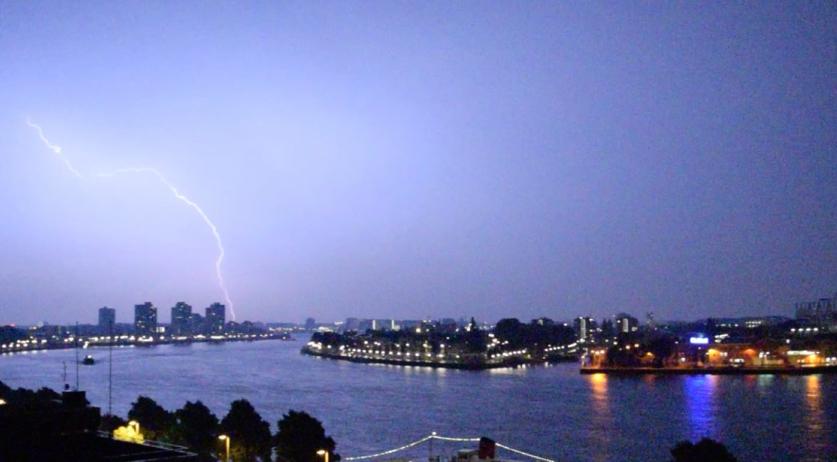 Thunderstorms that pulled across the Netherlands on Thursday night caused a number of problems. Lighting strikes resulted in fires in several places, as well as some disruptions to train traffic. Rock band Bløf's concert had to be paused for around 20 minutes due to the weather, NOS reports.

Fires in Tilburg, Zwijndrecht, Weesp, Wijk bij Duurstede and Naarden are all believed to be caused by lightning strikes. Lightning is also believed to be behind a big fire in a pig company in Heeswijk-Dinther, according to Omroep Brabant. Two barns burnt down, killing around 4 thousand sows.

Lightning also caused some problems on the rails. For example, no train traffic was possible between Haarlem and Leiden and from Nijmegen to the south of the country for some time. All weather related problems were resolved by Friday morning, according to NS's website.

A performance by Bløf in the garden of Soestdijk Palace was interrupted for a short time, after already starting earlier than planned due to the weather forecasts. About an hour and a half in, the performance was stopped because spectators had to leave the open stands, according to RTV Utrecht. The concert restarted after a break of about 20 minutes.

The thunderstorms pulled from the west to the east, leaving the country early on Friday morning.

The weather today is expected to be partly cloudy, but dry in most places, according to meteorological institute KNMI. The northern and eastern parts of the country may have some rain in the afternoon. Maximum temperatures will range from 22 degrees along the north-western coast to 28 degrees in the southeast.