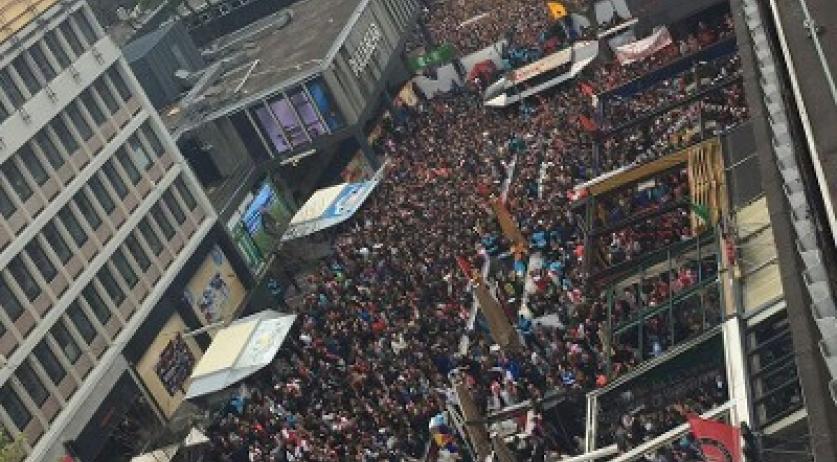 A "small group of rioters" caused major disruptions in Rotterdam after Feyenoord's shocking 3-0 defeat by Excelsior on Sunday, the police said in a statement. Some 100 people were detained for crimes including challenging the police, throwing fireworks and stones, insulting police officers and not following the police's instructions.

The riot police performed several charges to try and disperse the group of rioters. When that had no effect, the water canon and police dogs were deployed. The police are also launching an investigation into other rioters and expect that more will be identified and arrested during the course of the week.

About 100 thousand people were in Rotterdam to watch the match between Feyenoord and crosstown rival Excelsior. When it became clear that Feyenoord would not win this match, and thereby not become the Netherlands champion for the first time in 18 years, the atmosphere in the city changed from excited to disappointed and shocked, according to the police. "By far the largest group of supporters trailed away still during the match or shortly after it. Some of them stayed to give the players encouraging words when they got onto the player bus, welcome the team warmly at De Kuip and wish them well with next week's match", the police said in their statement. "However, a group of hundreds of 'fans' could not deal with the loss and decided to take out their frustration on the police and street furniture in Rotterdam city center."

Excelsior scored all thee their goals between the 56th and 65th minutes of the match. Feyenoord captain Dirk Kuijt called the defeat inexplicable. "Beforehand I had many scenarios in my head, but this was not one of them", Kuijt said to media after the match, NU.nl reports. "Sometimes football is inexplicable, and that was the case now. With 3-0 you can say that Excelsior deserved the win. It is very disappointing, but it is what it is."

Feyenoord is still a point ahead of number two in the rankings Ajax, who won 4-0 against Go Ahead Eagles on Sunday. If the Rotterdam club manages to beat Heracles Almelo at De Kuip next week, Feyenoord will still nab its first Eredivisie title of this century. Kuijt is confident that his team will succeed. "Now we will work with all our energy and positivity to next week. We are responsible and we will solve this for our fans. Against Heracles it will happen."

According to Rotterdam Mayor Ahmed Aboutaleb, next week's planned celebration for Feyenoord's title victory will not be affected by the disturbances on Sunday, NOS reports. He said that Sunday's disruptions "do not fall into the category of heavy riots", and the celebration therefore does not have to be scrapped. He called the riots "one of the scenarios we took into account". Aboutaleb added that he is "disappointed for Feyenoord, but also happy for Excelsior", which is also based in Rotterdam.

Feyenoord is facing Heracles at De Kuip in Rotterdam on Sunday at 2:30 p.m. Ajax will close the season with an away match against Willem II.