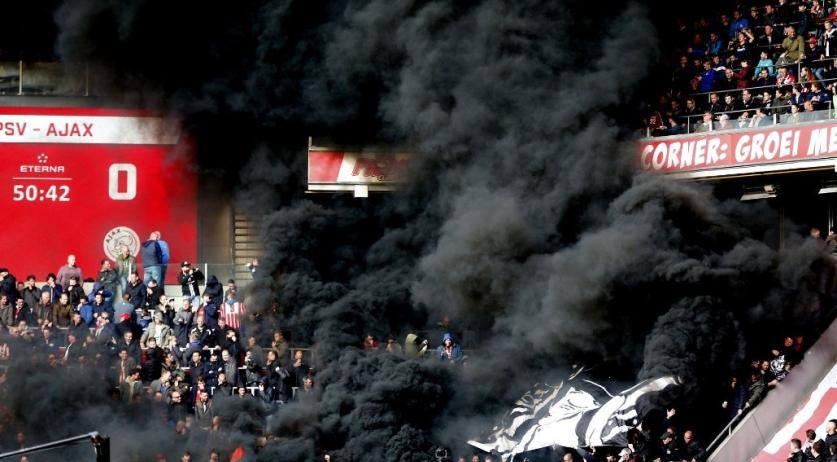 A huge smoke bomb set off among the audience of the PSV vs Ajax Eredivisie match at the Philips Stadium in Eindhoven on Sunday, left 15 people injured. The first aid team had to treat 10 supporters, four security guards and a steward for respiratory problems and burning eyes, ANP reports.

According to the news wire, a banner displayed with the smoke bomb showed that a small group of supporters were protesting against stadium bans with the action. The smoke bomb was set off in one of the corners of the stadium and caused a lot of smoke. Spectators in the second ring were particularly effected. A smaller smoke bomb that was set off a few minutes later, was met with booing from supporters. The match had to be halted for a few minutes while calm was restored.

One person was arrested. According to RTL he is a 35-year-old man believed to be a PSV supporter and the one to set off the huge smoke bomb. PSV security officers handed him over to the Eindhoven police.

PSV is furious about the incident and will find the supporters responsible, the club said in a statement, according to RTL Nieuws. "We will claim the damage from the perpetrators and give them a long stadium ban", Toon Gerbrands, general director of PSV, said.

PSV won the match against Ajax 1-0. The only goal was scored by Jurgen Locadia in the first half. Ajax's defeat means that the gap with front runner Feyenoord is now four points. If the Rotterdam club beats Excelsior in two weeks, Feyenoord will be national champion for the first time since 1999, according to NU.nl.