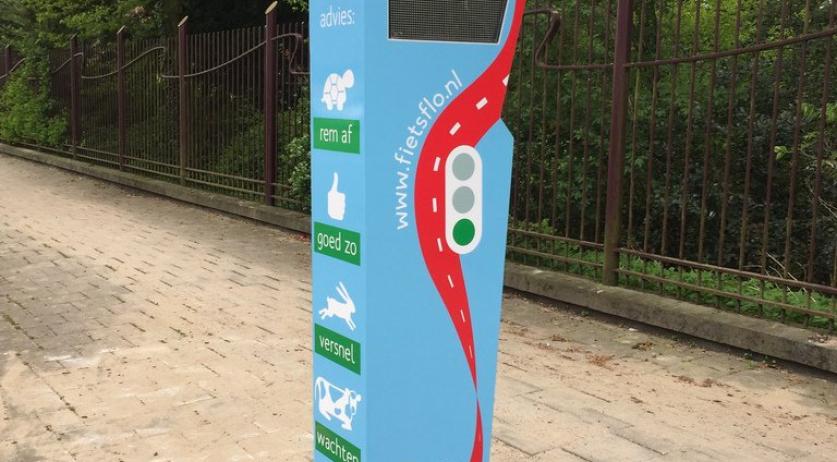 A Flo pole tells cyclists to slow down or speed up in order to make the next green traffic light Photo: @fietsflo / Twitter
Innovation
Flo
Utrecht
cyclists
Springlab
Amsterdamsestraatweg
Wednesday, April 19, 2017 - 15:40
Share this:

On Wednesday Utrecht launched a "smart" system on Amsterdamsestraatweg which will help cyclists make green lights. If you cycle at a steady 18 kilometers per hour, you should hit every traffic light on green. The system, called Flo, will also tell you whether you have to speed up or slow down in order to make the next traffic light, BNR reports.

Utrecht introduced this system after a study showed that having to wait for a red light is Utrecht cyclists' biggest annoyance.

The Flo system's radar detects the speed of individual cyclists at about 100 meters before a traffic light. The system then calculates how fast a cyclist will have to go to remain in the 'wave' of green lights. Poles along the bike path then shows pictures - a turtle, a thumbs up, a rabbit or a cow - to indicate to the cyclist whether he or she needs to slow down or speed up.

If you see a turtle, you have to slow down. A thumbs up means you're at the right speed, a rabbit means you have to speed up. And the cow means that you won't make the next traffic light before it changes to red.

Flo was developed by innovation agency Springlab. Eindhoven and Antwerp also plan to install the system in the coming months.