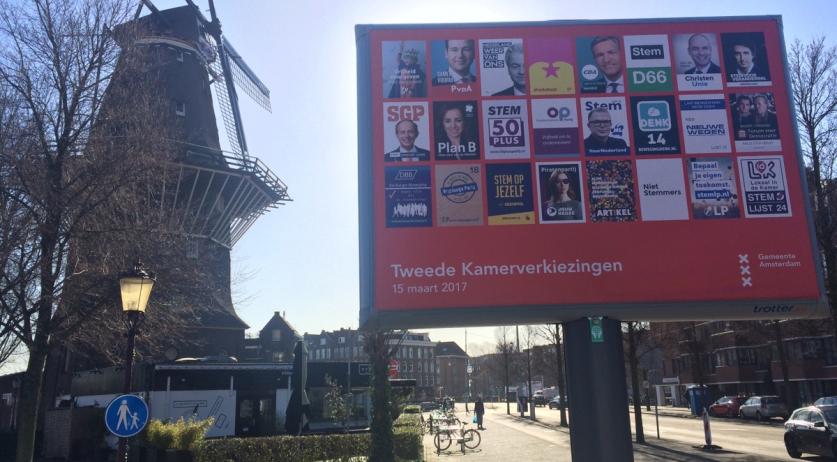 "What a night it seems to be," Netherlands Prime Minister Mark Rutte said to begin his election victory speech Wednesday night. "For the third time in a row the VVD is the largest party in the national elections," he added.

"It is also a night wherein the Netherlands, after Brexit, after Trump, has said 'no" to populism," he said. He praised the massive voter turnout of over 81 percent, a stark contrast to the comparatively low turnout in the UK for the Brexit referendum and in the U.S. for the 2016 general election there.

Rutte congratulated his VVD party, taking the stage around 11:15 p.m. on Wednesday at the World Train Center - The Hague. Strolling down an escalator to Mark Ronson's hit song "Uptown Funk," Rutte appeared to a cheering throng of people, perhaps the largest election party in the Netherlands following the 2017 general election.

He was also appeared contrite when speaking of his political colleagues in the Labour party, current leader and Deputy Prime MInister Lodewijk Asscher and former leader Diederick Samsom. "We had started this adventure four-and-a-half years ago, and it is with the Labour party that we managed to pass policies of economic recovery."

The anti-Islam leader of nationalist party PVV, Geert Wilders, reacted positively towards exit poll results despite performing poorer than earlier surveys projected. "Thanks, PVV voters! We've won seats!" he proclaimed on Twitter, following it up with a jab at the Prime Minister and his VVD party.

"And Rutte is nowhere near escaping me," he added. Wilders' party gained four seats in the Lower House of Parliament to 19, the culmination of a steady drop in support that began with the arrival of the new year. At that point, he was still projected to win as many as 35 seats. Still, the VVD faced the second biggest loss of the evening, losing ten of its 41 seats while still keeping the title of the country's largest party.

Jesse Klaver, the 30-year-old leader of the GroenLinks Party, was overwhelmed at his campaign-ending festivities, having won his party 16 seats, an increase of 12 over the last election. "What a special campaign we have run," he said, adding that he too is extremely happy with Wednesday's turnout. After thanking several people, he brought his wife Jolein to the stage, saying, "If there is any one person who I owe everything, it is my dear Jolein," he stated. The two shared a kiss, and Klaver promptly took a breath, and wiped away a tear before continuing.

In Klaver's speech, he congratulated most parties, including the PVV and CDA, before turning his focus to Labour leader Lodwijk Asscher. "You have fought a tough campaign, but your powerful perseverence is an inspiration for everyone with a left-wing heart."

Labour was perhaps the biggest loser of the evening was VVD coalition partner PvdA (Labour). Party leader Lodewijk Asscher, the country's Deputy Prime Minister, pledged on a "bitter night" to fight every day to win back the trust and support of voters.

"Social democracy will return, and the reconstruction begins today," he said on stage to party members Wednesday night.

Speaking at the D66 party, Alexander Pechtold claimed his party had a successful outing for the ninth election in a row, after congratulating Rutte and the VVD. "Starting tomorrow, D66 is the largest progressive party in the Netherlands," he said to a cheering crowd. He pledged that the 19 seats his party is predicted to win will continue to be used for constructive, progressive politics.

Sybrand Buma excitedly announced that his CDA had returned to become one of the largest parties in the Netherlands. The party was consistently part of a ruling coalition since the mid-1970s, and tied with both the D66 and PVV to win a projected 19 seats. "What a great night!" he said.

"Four years ago, I said we would rebuild day by day, stone by stone. And rebuild we have, but nobody could dream that the result would be so sweet," he said upon learning his party gained six seats in parliament.

Speaking to his Socialist Party supporters, Emile Roemer was pleased with his party's stability despite the "unstable times." He heaped praise on SP voters and, like Asscher, congratulated GroenLinks on their 12-seat gain. "This is not played out; there is not yet a new government," Roemer said, signaling his desire to be part of a ruling coalition.

​Henk Krol, of 50Plus, exclaimed, "We have doubled up!" in reference to his party adding two seats to its two existing seats in parliament. "Yes, we have had some head wind, but even that can not knock us down,'' he said on stage after dancing in the crowd.