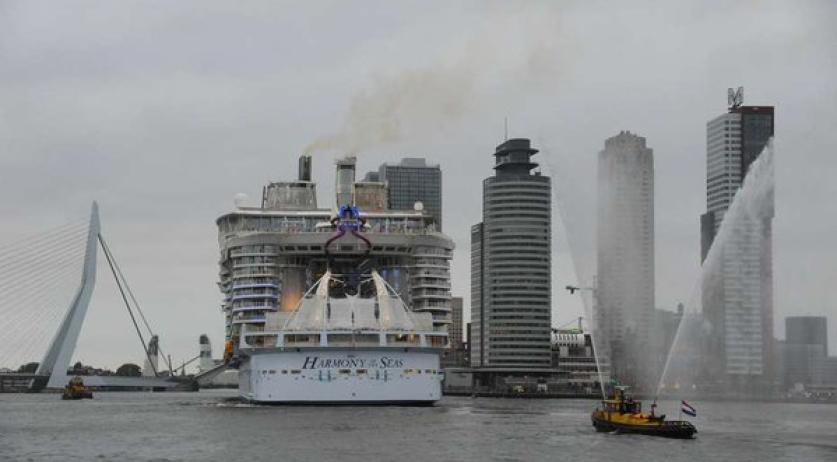 While the docking of the world's largest cruise ship Harmony of the Seas in Rotterdam on Tuesday led to much excitement among boat lovers, the ship's two giant diesel engines are raising some environmental concern. The massive cruise ship is equipped with two engines that are four stories high and burn a total of 250 thousand liters of diesel a day, NOS reports. According to British newspaper The Guardian, a large cruise ship emits as much CO2 as 84 thousand cars, as much nitrogen oxide as over 400 thousand cars, as much particulate matter as about a million cars and as much sulfur dioxide as 376 million cars. Even while moored in the harbor, the ship emits large amounts of pollutants. Because while the ship is not running full strength, it still has to generate electricity for the about 8 thousand passengers on board. At rest a large cruise ship burns about 700 liters of diesel per hour, or as much as a few hundred trucks. The Harmony of the Seas is moored on the border of Rotterdam's environmental zone, where no petrol cars manufactured before July 1992 and no diesel cars made before 2001 may enter. A spokesperson for the municipality does not think this a contradiction. "It's about reducing the constant flow of soot particles and that flows come in many places from car traffic", the spokesperson said to NOS. According to the port of Rotterdam, some 80 cruise ships are expected to dock in Rotterdam during this year, 20 more than last year. GroenLinks council member Arno Bonte thinks this should be reconsidered. "This simply goes against the policy. You can see the soot coming out and the pollutants naturally blow into the environmental zone", he commented to the broadcaster. He suggests the construction of a shore power system to plug in ships when they are docked, or set up a quota of the number of ships allowed in the city each year.