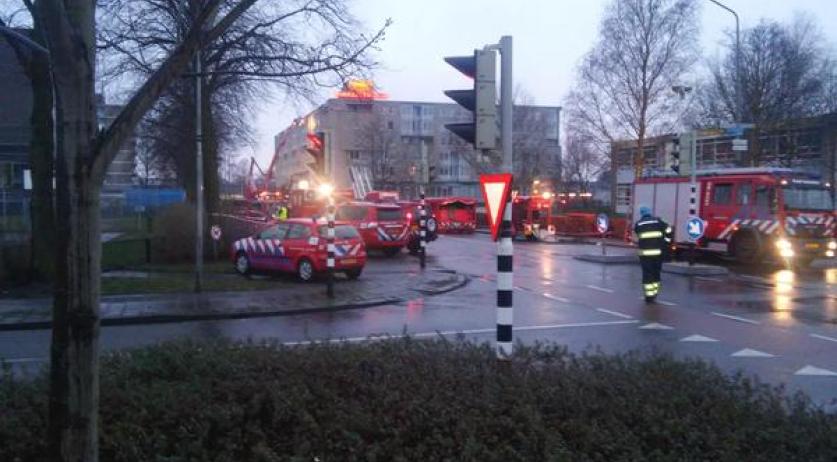 Search is on for victims in roof collapse; 40 injured in fire

Four people were seriously injured when a fire in a ground floor snack bar led to the roof collapse of the senior center above it. First responders were still combing through rubble looking for other victims as of 8:30 a.m on Friday, the Gelderland-Zuid Safety Region announced. Several media outlets also reported a fifth serious injury. Six others were also reported wounded, while another 30 were treated for minor injuries, the region stated. Several of those hurt were treated for smoke inhalation, the fire department said. The fire in the cafe on O.C. Huismanstraat was brought under control by 8:35 a.m. It was first called in at about 5:30 a.m. on Friday. Within seven minutes the alarm was raised to a GRIP one regional emergency. Dozens of rescue workers were sent to the scene, including at least one helicopter ambulance. The alarm was raised a second time at six o'clock, and then a third time just before 6:40 a.m. The building was still being evacuated, local police said at that time, with residents taken to the nearby Shalmei community center. Nijmegen mayor Hubert Bruls is expected to make a statement there at approximately 9 a.m. A co-odinated regional incident response procedure (GRIP) level three alarm is pulled when an emergency affects at least part of a larger municipality. A commander from one of the responding emergency service teams is put in charge of the entire response, the affected mayor puts a civilian response into action with their policy team, and notice is given to the Minister of the Interior, the National Crisis Center and a representative of King Willem-Alexander.