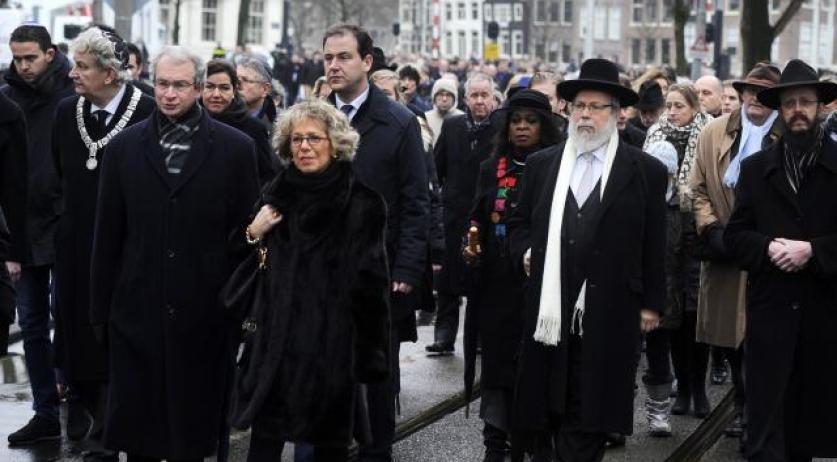 Civic leaders in the Netherlands met in Amsterdam Sunday to commemorate the seventieth anniversary of the liberation of the Auschwitz-Birkenau concentration camps. An estimated 1.1 million people died at the site in Poland, ground which the Red Army took control of on January 27, 1945. The ceremony began with survivors of concentration camps, residents, and leadership walking from city hall to the Auschwitz memorial in Wertheimpark, a small park in the center of Amsterdam. A wreath was laid at the site by a 93-year-old survivor of the Auschwitz death camp. Amsterdam Mayor Eberhard van der Laan was joined by Deputy Prime Minister and Social Affairs Minister Lodewijk Asscher, Health Secretary Martin van Rijn, and the heads of both houses of Parliament. Intolerance was the focus of Jacques Grishaver’s speech to the crowd. He talked of beheadings in some parts of the world, but als of oppression in Europe and Africa, “Even in our ever-tolerant Netherlands,” Grishaver said. Grishaver leads the Netherlands Auschwitz Committee. “For the generation that survived the war, and also those today, this is frightening and threatening,” he said in reference to hate crimes against both Jewish and Muslim sites. “Will history repeat itself? Is the Jewish community still safe?” broadcaster AT5 quoted him as saying. A large Dutch delegation, including King Willem-Alexander, will attend the international ceremony next week at the Auschwitz museum in Poland.