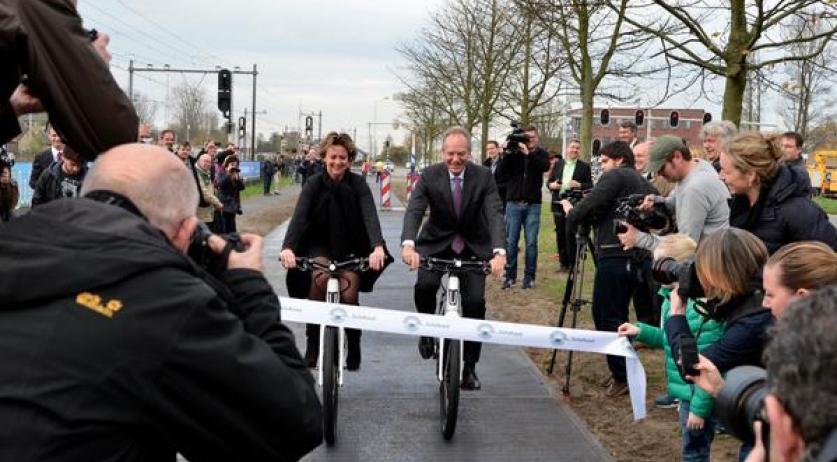 The SolaRoad, the first bicycle path on solar energy, was officially opened today by Minister Henk Kamp of Economic Affairs. "SolaRoad is a prime example of Dutch innovation." On the way to a sustainable energy supply, this kind of initiative is exactly what we need." Said Minister Kamp. "This may also be a good export product." According to Sten de Wit, spokesperson for SolaRoad, the laying of the road went exactly as they planned. "We had a very tight schedule, and we were very well prepared." The pilot route of a hundred meters consists of concrete modules of 2.5 to 3.5 meters. In one direction solar cells are arranged under a hardened glass surface layer of about 1 centimeter thick. The other side has no solar cells and is used to test different top layers. De Wit thinks that there is enough support to see more solar roads and bike lanes, not only in Noord Holland, but also in other provinces. Foreign media are critical about the effectiveness of solar roads. There are quite a few drawbacks to the solar bicycle path. The solar panels can be dirtied by a thick layer of mud, ice or snow, decreasing the effectiveness considerably. Another problem is that the panels are not tilted towards the sun. The result may be that they produce 30 percent less electricity than conventional panels, writes The Guardian.