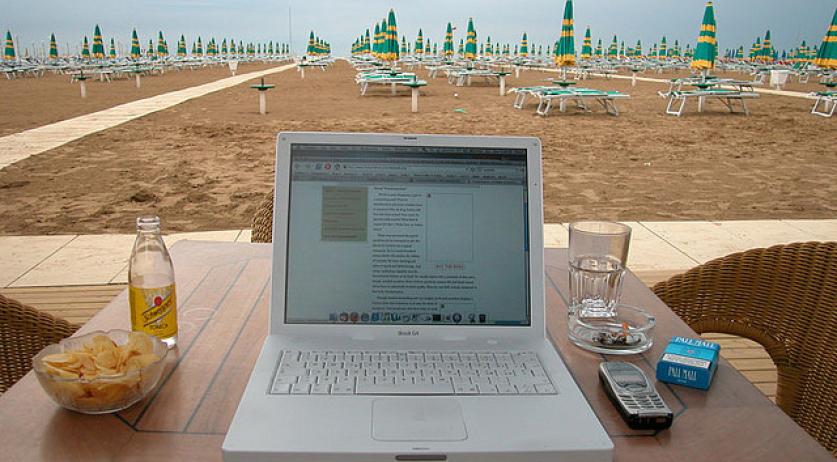 Research from Multiscope shows that the tendency to continue work during the holidays is increasing. The wider availability of internet via wifi is making accessing work during vacation time easier, the NOS reports.  Almost one-third of working Dutch people also choose to work during vacation time. Of these people, nine percent is online daily for their job. Another 20 percent turn on their computers several times during their vacation to do work. Wireless internet is available almost everywhere, which for some people means that the temptation to do work is difficult to avoid. While vacation time is meant to be used to refresh the system and get away from the stresses of the job, as professor Taris from the University of Utrecht says. Working during vacation time has to be a voluntary choice, Taris says. A boss that calls or emails employees unexpectedly can cause stress. "Only work-addicts like that. But that isn't an unhealthy addiction for nothing." For freelancers and entrepreneurs, being able to read work emails during vacation can actually be a good thing, says Dr. Jessica de Bloom of Radboud University, who did her PhD on this subject. She says that this can put them at ease, and give them further incentive to take full advantage of the holiday. For others, even the option to check work emails on vacation is stressful, as they find it hard to distance themselves from work. According to the research, six out of ten people have this problem. Many vacation accommodations understand the need for wifi on vacation, and are investing money into making internet available at all hours in hotels and on camping grounds. More than half of Dutch people look at internet availability when booking a vacation. Since 2011, overall internet use has gone up significantly. Other than work mail, 85 percent of Dutch vacationers also check their private mail, and 66 percent keep an eye on their social media networks. In 2011, this was 63 and 25 percent respectively.