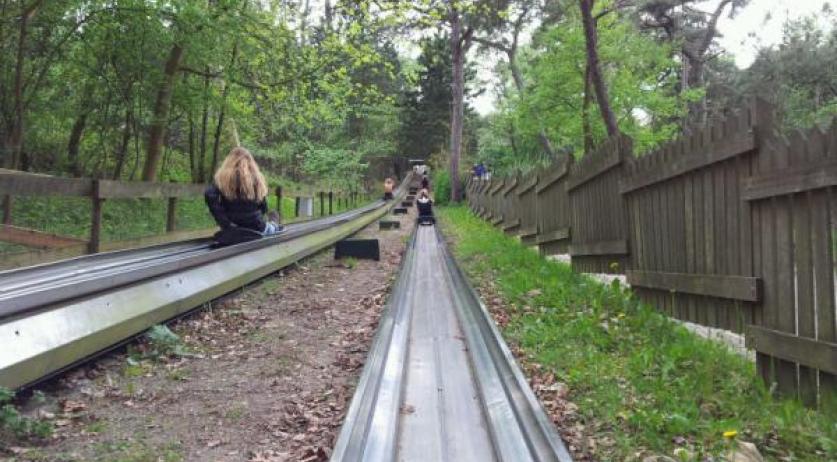 Accidents at the toboggan run at theme park Duinrell are "the order of the day", it appears. A woman from Amsterdam took her matter to court after she became injured at the park's attraction. Like a can of worms, dozens of other cases of accidents at the same ride are coming to the foreground. De Telegraaf reports that the victims would love nothing more than for the 'deadly' attraction be shut down. A 26-year old woman from Amsterdam received head and arm injuries after her arm landed between her toboggan and the rails. This is not the first time that an accident has taken place at the toboggan run. The attraction does not have safety measures such as seat-belts or safety brackets like rollercoasters. Passengers take a seat in the toboggan and then have to hold on and try their hardest not to get flung out of their seat as the toboggan races through the trees at more than 50 kilometers per hour. One visitor did fly out of his seat, and walked away from the fall with a bruised rib. After this incident, in June, Duinrell took extra safety measures. "Entire track parts have been replaced, and several carts have been fortified", spokesperson Peter Wijnen said. The latest victim took her incident to a lawyer over this particular attraction. "Bystanders told her that accidents at the toboggan run are the order of the day", says council woman Feride Tosun of Alpha Advocaten. According to Tosun, similar accidents at the same attraction had happened several times already, that day. According to anonymous sources for De Telegraaf, staff members at Duinrell, this is not a freak occurrence or even coincidence. "In the peak seasons, I see people flying from the tracks almost daily. Sometimes a trip to First Aid is necessary, sometimes visitors have to be brought to hospital with sirens blaring." The source even says that there used to be a first-aid post next to the attraction years ago. According to spokesman Wijnen, Duinrell management is currently analyzing all incidents. "We will discuss those with a body of inspection, to see what the areas of improvement may be. Safety cameras are an option."